For several decades now TURP (also known as the “re-bore operations”) has been the standard treatment for men with lower urinary tract symptoms or water work trouble secondary to an enlarged prostate (BHP). TURP surgery produces durable and reliable improvements in flow rates and subjective symptom scores. As a result, it has been one of the most common urological operations performed.

Despite its efficacy, however, this prostate surgery is associated with a significant side-effect profile, including bleeding and the need for blood transfusions, infections, strictures, sexual problems and incontinence. In fact the rate of erectile dysfunction (ie erections not being as good as they were prior to surgery) has been reported as high as 18% in some series. In addition to the complications from TURP men who undergo a TURP require on average two to three days of catheterisation after the surgery and hospitalisation before undergoing a trial of void (catheter removal) and discharge.

GreenLight Laser prostatectomy (laser prostate surgery) was introduced in 2003 to with a view to providing excellent results comparable with a standard TURP procedure but with significantly fewer side effects. The laser prostate surgery technique was pioneered by a Dr. Malek from the Mayo Clinic, in the United States, initially using first generation, low powered machines. The initial models have now been used with excellent results for several years. These initial results demonstrate excellent functional outcomes with improvements in flow rates and symptoms that are as good and as durable as those achieved with a TURP procedure. The advantages to GreenLight Laser prostatectomy, however, include a significant reduction in the likelihood of bleeding, significant reduction in catheterisation times, hospital stay and complication rates. 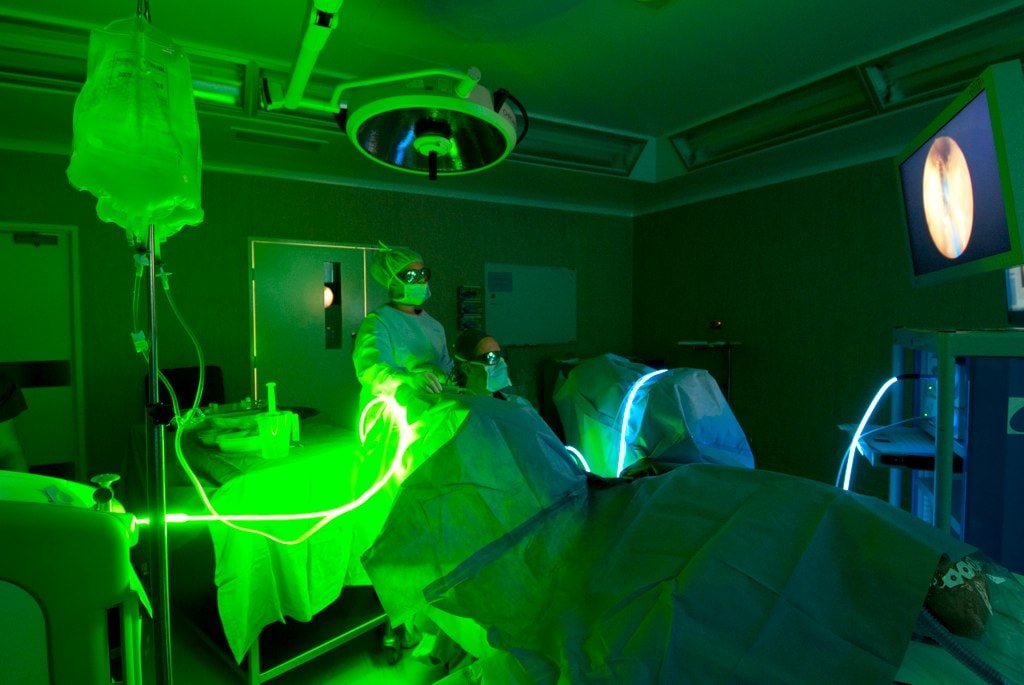 In Dr Chabert’s clinic younger men have a catheter placed for only 2 hours after surgery and 95% of these men are able to return home on the same day as their laser prostate surgery. Older men have a catheter for an average of 14 hours, spending one night in hospital before returning home.

There has been a recent upgrade of the technology allowing higher energy to be delivered in a more focused fashion. This has resulted in more precise surgery and reduced treatment times. In contrast to TURP, laser prostate surgery allows vaporization of tissue and simultaneously seals the tissue resulting in an almost bloodless field. The net result is that patients who are on blood thinners can be treated whilst remaining on this medication.

Through LUA Dr Charles Chabert has established the first GreenLight Laser Prostatectomy program in Queensland. Dr Chabert was one of the first surgeons globally to use the 180W XPS GreenLight Laser in combination with Moxy fibre technology.

In the majority of cases men will be treated with a single overnight stay in hospital or be allowed to return home on the same day as their operation. A general anaesthetic most commonly is used for this prostate laser surgery. A telescopic camera is then inserted into the penis and the internal surface of the prostate visualized. The GreenLight laser beam is then directed onto the prostate surface and tissue vaporized in an almost bloodless fashion. GreenLight Laser vaporization is continued until all obstructing prostate tissue has been removed.

A small urethral catheter (small plastic tube into the bladder) is inserted at the end of the procedure. This is left in place overnight only. After removal of the catheter, men go home once they have successfully passed urine and emptied their bladder.